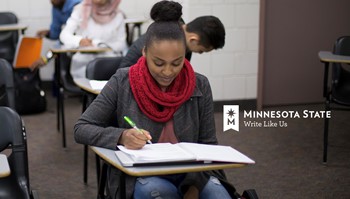 Write like will host ten writers in residence during the 2021-2022 academic year. Five of the residencies will feature nationally prominent BIPOC authors, one each at five participating campuses. The other five residencies will feature local BIPOC author-mentors who will work throughout the year with BIPOC mentees—students at each of our campuses. Write Like Us hopes to increase BIPOC recruitment, retention, and representation in our Associate of Fine Arts (AFA) and creative writing certificate programs—programs with high rates of persistence, graduation, and transfer.

Tickets are free and open to the public. Attendees are required follow all relevant college COVID-19 mandates.

Copies of Brit Bennett's "The Vanishing Half" and "The Mothers" will be available for purchase from Anoka-Ramsey's Campus Store. Pre-order and review ordering directions here.