Theatre season at Anoka-Ramsey Community College opens Oct. 29 with “Lend Me a Tenor”

Theatre season at Anoka-Ramsey Community College opens Oct. 29 with “Lend Me a Tenor” 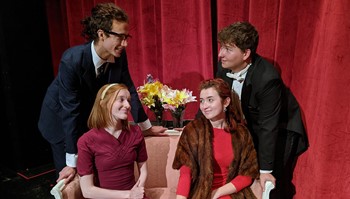 Anoka-Ramsey Community College theatre will return to the Performing Arts Center stage on campus with a fall production of “Lend me a Tenor” by Ken Ludwig.

Winner of three Tony Awards and four Drama Desk Awards, “Lend Me a Tenor” is just the wacky comedy to kick-off the season according to Director and Theatre program faculty member, Lisa Weaver.

“Initially I was going to do a serious drama, and then I decided what we all really need is some laughter,” said Weaver.

“Lend Me A Tenor” is set in Cleveland in 1934, where the Grand Opera Company is primed to welcome world-famous singer Tito Merelli, known as Il Stupendo, the greatest tenor of his generation, to appear for one night only as the star of the opera. Tito arrives late, and through a hilarious series of mishaps, passes out and is presumed dead. In an attempt to salvage the evening, hysterical mix-ups and confusion ensue in this wacky comedy.

The all-student cast features veteran performers and students who will be performing at Anoka-Ramsey for the first time. For both, the production has been a refreshing experience.

Sara Kuntz, who plays Diana in the show  said, “I’m happy to be back on stage with a full production, this is such a perfect play to come back to because this is so lighthearted and funny. It will be a great experience for the audience.”

To learn more about the Theatre program at Anoka-Ramsey visit AnokaRamsey.edu/theatre.